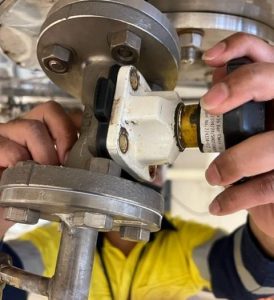 Recently, Flowtherm’s service team went and helped a customer with creating a safer workplace by replacing their manual Saunder valves for forty-four new Saunders actuator valves. This customer got in touch with Flowtherm, as there was a worksite incident with one of the operators. They had difficulties with accessing the valves when it came to opening or closing them.

They had manual diaphragm valves installed, which is a valve ideal for control of flow by controlling the pressure drop through the valve. But the design utilises a handwheel to allow for the desired amount of substance to flow through the system. The handwheel wouldn’t be such a flaw but due to the placement of the valves in the plant it created an unsafe environment when handling them. Due to the design of the workspace the company had the valves installed along the celling of their plant to enable more space and so that the valves were out of the way. However, this makes it difficult to access and use.

The customer got in touch with Flowtherm to ask for some options and solutions on how to make it safer in the future when they need to open or close the valves. The customer concluded that actuating all the valves was the best solution for them as it meant all physical access requirement would be minimal.

What makes actuators safer to use? In this case the actuators created a safer environment due its design. Actuators are a device that enables the valve to open and close or simply ‘actuates’
the valve, causing it to operate. Unlike the manual bonnets, which need physical handling to operate, the actuators complete the job of the opening and closing of the valves. Allowing for
workers to not have to turn a handwheel that’s positioned in a difficult to reach place- like the ceiling. 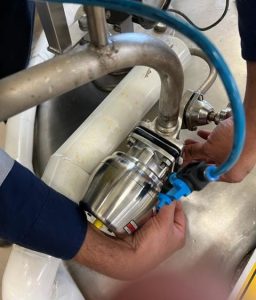 The customer was set on changing them all to actuators and so Flowtherm then handled and provided them with the actuators last year. The company initially intended on handling the changing of the manual bonnets to actuators themselves, however, were short in inhouse labour due to numerous limited shutdown periods between production. So, they reached out to Flowtherm’s service team for help in actuating the valves. Our flexible service team were happy to help and were flexible and adaptative.

They were very malleable when the original eleven valves that were required jumped to twenty-four. On their first visit in May, our team worked on actuating these twenty-four as
well as helping the customer in changing the diaphragms of the other valves on site. Additionally, the customer requested help in connecting the new actuators that were installed
and changed by us to air.

However, there are some more valves than need to be actuated so a date in June had been booked. Moreover, there is a high probability of another day needing to be booked in due to
the likely hood of more work than expected in the original quote.

Ultimately, Flowtherm’s service team worked vigorously in helping our customer in creating a safer environment to work in. Assisting in the changeover of all the manual bonnets of the diaphragm valves to actuators so that any physical access is strictly minimal- allowing for the valves to operate with little need for opening or closing the valves manually.

How Actuators can Help With Saftey in The Workplace
Recently, Flowtherm’s service team went and helped a customer with creating a safer workplace by...
read more
Flowtherm Leading The Charge in Holistic Maintenance – The Service Industry’s Future
A well worn but well-maintained adage, an ounce of prevention is worth a pound of cure is a critical...
read more
Introducing the new Metenova MixOne
A short introduction to the new Metenova MixOne single-use mixer from Bruce Grieg at Flowtherm...
read more